Little Snitch 4 is designed and built to perfectly integrate into macOS, providing you with the best experience you’ve come to expect.

During the Installation process you may see a message: “System Extension Blocked”. This is part of a new security mechanism in High Sierra, requiring you to explicitly allow the installation of a third party system extension. To complete the installation of Little Snitch you have to allow loading the extension in System Preferences > Security & Privacy > General. 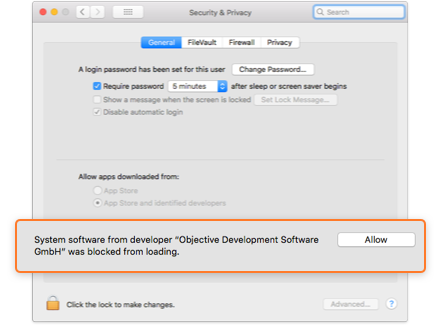 Some operations in Little Snitch Network Monitor (especially the Map View) trigger a switch to the discrete graphics card. If defective RAM locations are touched this causes an operating system crash (kernel panic). You can distinguish this type of panic by looking at the panic log. It shows the graphics driver as the component initiating the panic.

Note that only a minority of the mid 2010 MacBook Pro models are affected. As far as we can tell, there is no way how Little Snitch Network Monitor could prevent the graphics engine switch.

If you are affected by this issue, do not open the Map View. Once the Map View has been opened, Network Monitor renders all graphics operations on the discrete graphics engine.

The NVIDIA graphics drivers (as opposed to the original drivers provided by Apple) need to load program code into running apps. Little Snitch and other apps like iBooks do not allow this due to security reasons. When the Map View or the Inspector is open, Little Snitch Network Monitor cannot render its window contents.